In order to be able to maintain our web site we use cookies.
By continuing to browse this site you agree to our use of cookies.
You can read more about our privacy policy (incl. cookies) here.
MATOMO Web Analysis: (Checkbox checked = Active / Checkbox unchecked = Deactivated)
By clicking on the close button top right you can hide this banner for 30 days (note: sets a cookie to store your preferences)
✖
Main Menu / Search
Home > Components > Transponder Positioning > HG 70653 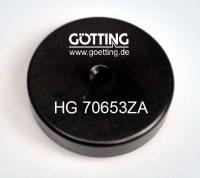 The transponders are operated at 128 kHz. The transmitting antenna of the reading unit supplies the transponder with energy by using an alternating field of 128 kHz. This induces a voltage within the coil of the transponder, which generates a current that is sufficient power supply for the electronics.

The system operates through fluid, gaseous as well as solid material. However, if mounted directly on or within metal, the transponder‘s reading distance is influenced and the positioning signal may be distorted. The Read-Write transponders are equipped with an EEPROM in which the code is stored. The EEPROM may be rewritten up to more than 100,000 times.

Application Examples from the Automation Industry