In order to be able to maintain our web site we use cookies.
By continuing to browse this site you agree to our use of cookies.
You can read more about our privacy policy (incl. cookies) here.
MATOMO Web Analysis: (Checkbox checked = Active / Checkbox unchecked = Deactivated)
By clicking on the close button top right you can hide this banner for 30 days (note: sets a cookie to store your preferences)
✖
Main Menu / Search
Home > Service > Product Archive > HG S 89500 (old)

Note: The systems and devices listed here are no longer available for new projects.
All documents for discontinued products can be found in our archives. They are available for our customers who are still using older products. 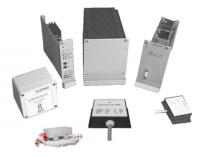 In contrast to the optical track guidance (e. g. dark line on a light coloured surface) the inductive method has the advantage that it is not sensitive to oil, dirt, tyre abrasion etc. Thus their use has gained acceptance in harbours and industrial plants. Reference frequency and current as well as lateral separation and height from guide conductor can be selected from a large scope of variants.

Some sensors also have a microcomputer, which substantially increases output performance and the comfort while using the device. This track guidance system is mostly used for the operation of in-company transport. Increasingly buses (public transport), special vehicles (tunnel) and cars (for test coliisions) are also being fitted with inductive track guidance systems.

An inductive system typically consists of four components (guidelines can be downloaded here).

The ground equipment has to be installed by the customer.