In order to be able to maintain our web site we use cookies.
By continuing to browse this site you agree to our use of cookies.
You can read more about our privacy policy (incl. cookies) here.
MATOMO Web Analysis: (Checkbox checked = Active / Checkbox unchecked = Deactivated)
By clicking on the close button top right you can hide this banner for 30 days (note: sets a cookie to store your preferences)
✖
Main Menu / Search
Home > News > 2017 > Nomination for the Price of the Innovation Network Lower Saxony

Nomination for the Price of the Innovation Network Lower Saxony 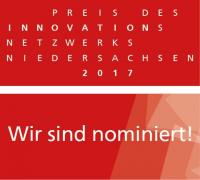 Lehrte, March 6th 2017 — The IPH Hannover and Götting are collectively nominated for the price of the innovation network Lower Saxony (Preis des Innovationsnetzwerks Niedersachsen 2017). The nominated project is called "TCmobile".

"Call a transport!" (bei Anruf Transport!) is the title the innovation network gives its description of the project. The idea behind TCmobile is to give users an easy way to assign transport jobs to automated guided vehicles (AGV). As part of a diploma thesis an app for android smartphones has been developed. This app uses Google's speech recognition technology, which enables a cost-efficient implementation.

The app TCmobile running on a smartphone

By using TCmobile users can assign jobs to AGVs (e.g. Götting KATE) by using spoken commands. One smartphone can be used to control several vehicles, no additional devices need to be purchased. The app was implemented for a diploma thesis at the IPH in cooperation with Götting. IPH and Götting have successfully carried out several joint research projects regarding the interaction between humans and automated vehicles.

Götting KG founded in 1965, ist an innovative company placed in Lehrte near Hannover (DE) and works worldwide.The company develops and produces wireless data communication systems and sensors for automatic track guidance of so-called automated guided vehicles (AGV). As far as we are informed Götting KG has the largest product range of different components for trackguiding AGV.

Further main topics are traffic technology, RF measuring, wireless data communication in general as well as customized developments for car manufactureres, electronic- and radio broadcasting industry. Currently our company employs 90 professionals of which about 35 are experienced masters in engineering and are responsible for research and development.

The core competency of FOX – a special department of Götting KG – is focused on the automation of serial vehicles, especially for the outdoor area (trucks, pay loaders, fork lifts etc.).