In order to be able to maintain our web site we use cookies.
By continuing to browse this site you agree to our use of cookies.
You can read more about our privacy policy (incl. cookies) here.
MATOMO Web Analysis: (Checkbox checked = Active / Checkbox unchecked = Deactivated)
By clicking on the close button top right you can hide this banner for 30 days (note: sets a cookie to store your preferences)
✖
Main Menu / Search
Home > Components > Magnetic Tape Guidance > HG G-19603

For the track guidance of Automated Guided Vehicles (AGV).

The magnet sensor HG G-19603ZA detects the magnetic field above a magnetic tape in horizontal and vertical direction and continuously calculates the actual deviation diagonally to the direction of travel. The values are continuously output via the CAN/CANopen® bus interface.

The sensor contains three independent detection systems. It can thus detect junctions (second track) and follow turnoffs. Via the interface one of max. two tracks underneath the sensor is dynamically selected.

The image below shows typical levels of the output signals: Via the CAN/CANopen® interface the deviation from the track as well as the current level of the magnetic field are output. Additionally a detect signal is generated on the bus when a magnetic tape is detected underneath the sensor. 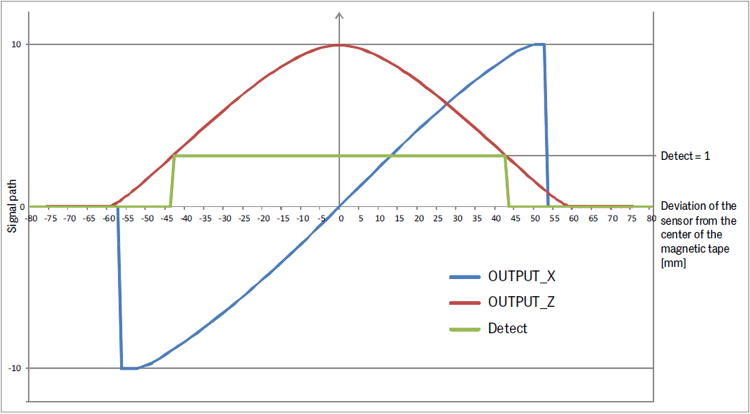 Typical levels of the output signals